As part of our research on the accomplishments of highly-skilled, foreign-born academics in the United States, we found that foreign-born scientists and engineers are over-represented among U.S. Nobel Laureates. From 1901-2013, of all the countries in the world, the United States, at 42.4%, receives the highest proportion of Nobel Prizes. Moreover, 30.7% of these U.S. awarded Nobel Prizes are garnered by persons who immigrated to the United States. For more details on these findings, download the Immigrant Nobel Prize Laureates Research Brief below. 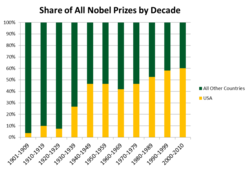 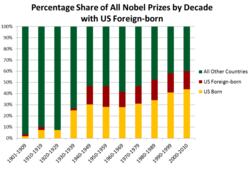