Highly skilled immigrants and immigrant entrepreneurs have been paramount in contributing to the United States, as well as to all humanity. The Nobel Prize rewards their immeasurable impact. Previous research has indicated foreign-born Nobel Prize Laureates’ dedication to excellence. This research examines how immigrant Nobel Prize Laureates (1901-2013) have allowed for the legacy of Alfred Nobel to live on through his endowment.  “Prizes to those who, during the preceding year, shall have conferred the greatest benefit to mankind."

Our Huffington Blog post, Immigrants to America, Alfred Nobel, Mark Zuckerberg and the 2015 Nobel Prize, demonstrates that Foreign Born US Nobel Laureates exhibit excellence and innovation. They have set the bar high for today’s extremely successful entrepreneurs and mega-philanthropists, including Mark Zuckerberg, Bill Gates, and Warren Buffett.  The work of these philanthropists also resonates with the Nobel bequest. These philanthropists also recognize the value of immigration reform, one that will allow future immigrants to sustain the contribution of American immigrants to the legacy of Alfred Nobel.  As this project proceeds, we will be posting updates and research briefs. You can find our recent Huffington Blog post on this topic here. 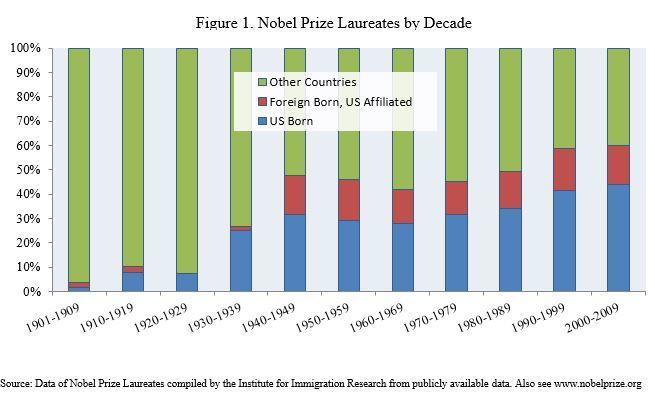