Oliver Hart was celebrating his birthday when he received the early morning call informing him that he won the Nobel Prize this year. Excited about winning the prize after being nominated a few times, he hugged his wife, woke his son up, and called fellow Nobel laureate Bengt Holmstrom for a chat.

Both Hart and Holmstrom are economists and share this year’s Nobel Prize in Economic Sciences. Hart was born in the United Kingdom and is a professor at Harvard University, while Holmstrom was born in Finland and is a professor at the Massachusetts Institute of Technology (MIT). They won jointly based on their work on contract theory. Both are immigrants to the United States, but not the only ones among this year’s US Nobel laureates. This year’s US Nobel laureates dominated the headlines not only for winning seven of the eleven prizes given worldwide, but because six of the winners are immigrants to the United States working at US educational institutions. In addition to Hart and Holmstrom, four other US immigrants won Nobel Prizes in chemistry and physics. They were all born in the United Kingdom: J. Fraser Stoddart in chemistry; David J. Thouless, F. Duncan M. Haldane, and J. Michael Kosterlitz in physics. This trend demonstrations the incredible influence the US educational system has in producing environments that encourage potential Nobel laureates.

Since the Nobel Prize was established in the early 1900s, about 40 percent of the more than 900 prizes have gone to Americans. Additionally, about 35 percent of all US Nobel laureates have been immigrants to the United States. Eighty percent of those individuals worked at universities at the time of winning the Nobel Prize. Immigrant scholars have been winning Nobel Prizes alongside their US born counterparts since the creation of the Nobel Prize. For a breakdown of the data see Chart 1. 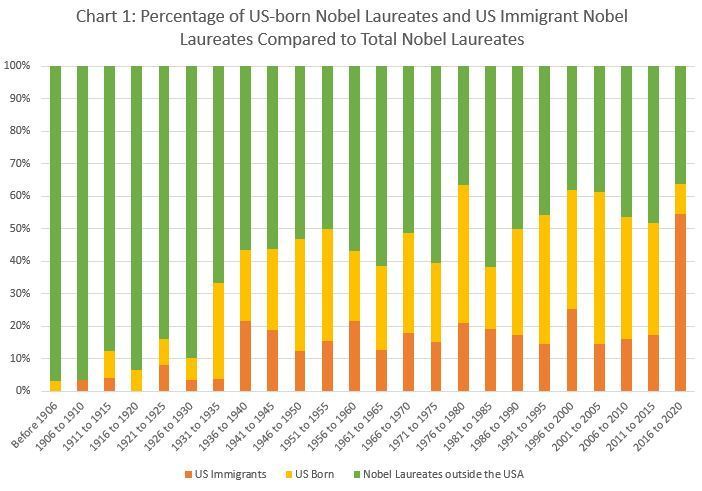 Additionally, in the last 10 years there has been a mix of US born and immigrant Nobel laureates except in 2012 when all the winners were US born (see chart below). 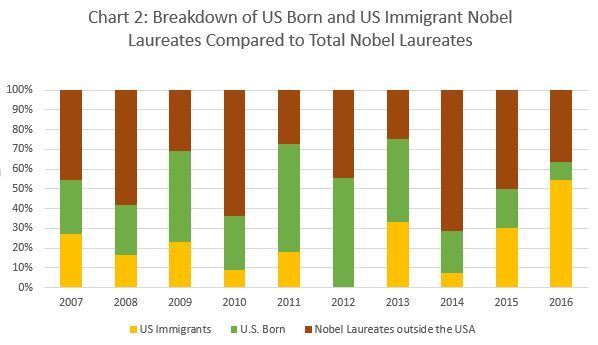 The majority of Nobel laureates have come from elite educational institutions in the United States. For example, this year’s winners are faculty members at Harvard University, Princeton University, Massachusetts Institute of Technology (MIT), Northwestern University, University of Washington, and Brown University. An examination of the departments to which the Nobel laureates belong reveals diverse faculty pools. For example, in the economics departments of three elite universities – Princeton, Harvard, and MIT - from which a faculty member has won a Nobel Prize in the last two years, we notice that immigrants make up significant, and in the case of Princeton, the majority, of the departments, as shown in the chart below. 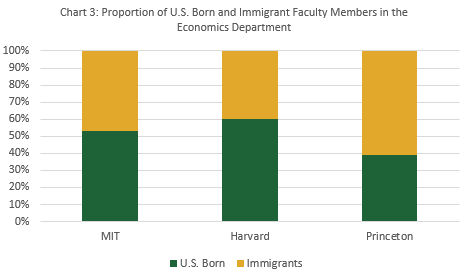 Immigrants to the United States play a significant role in the educational landscape of the country. According to a study by education researchers Zeng Lin, Richard Pearce, and Weirong Wang that compared research on immigrant faculty members, in 2000 15.4 percent of faculty members were born outside the country and in 2004 that number increased to 22.1 percent. In 2004, the foreign-born population in the United States was 11.7 percent. The authors argue that this trend shows a shift from a need for immigrant physical labor to immigrant intellectual labor.

Karen Webber, a professor at the Institute of Higher Education at the University of Georgia, examined differences in research productivity between US born and immigrant faculty members and concluded that the production of research depends on workload and tenure status. Those occupying junior positions, or non-tenured positions, produce more scholarship, to possibly obtain a tenured position because the production of knowledge is connected to promotion within the academic world.

Individuals from all over the world have come to the United States to study at its educational institutions, which speaks to the global influence the country’s academic world has on knowledge production, education, and innovation. In an interview posted on the Nobel Prize website, physicist F. Duncan M. Haldane credits his migration to the United States to the openness to innovation within the US educational system.

This article is part of a larger research project that the IIR is undertaking on the impact and success of immigrant faculty members in the US educational system, as indicated by the high level of immigrant US Nobel laureates. Stay tuned for the full research brief to be released in the spring.